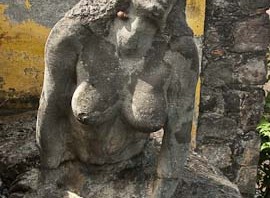 Today we join our first Maasdam tour, and I am particularly interested in it because it will allow me after 15 years to revisit St. Pierre, where each and every of its 30,000 inhabitants—except one—died following the eruption of Mount Pelee in 1902. St. Pierre is located on the east coast about 45 minutes north of Fort-de-France, too far for the volcanic explosion to have impact there.

Although St. Pierre was designated by France as a “Ville d’Art et d’Histoire” in 1960, the town of is not a frozen-in-time archaeological relic. Today, according to our guide, St. Pierre has about 5,000 residents (a net loss of 25,000) who rely on fishing and agriculture for their income.

This is a big contrast to St. Pierre at the beginning of the 20th century. It not only was the thriving capital city of Martinique, it was called the “Petit Paris” of the West Indies due to its economic and cultural vitality. The people who died were, literally, the victims of politics.

This was because early May was the eve of elections. And, according to our guide, the sitting governor used soldiers to block the single road leading in and out of the city so everyone was forced to remain so they could vote for him.  The residents of St. Pierre knew Mount Pelee was going to erupt. The volcano—still active today–had given all the warning it could: spewing sulphur and jolting the countryside several times. Nonetheless, everyone was kept under house arrest, unable to flee..

When the volcano erupted at 8 a.m. on the morning of May 8, 1902, some people were praying in church. Others were asleep at home.  In perhaps 3 minutes or so, a cloud of ash erupted from Mount Pelee and covered the city.  The hot ash ignited wooden roofs and sides of buildings blazed in fire throughout much of the town. Yet the people probably were dead already at this point, killed by the volcano’s poisonous fumes.  Almost instantly. Petit Paris was transformed to Petit Pompeii.

Is there a moral to this catastrophe? Or only blind, dumb luck? Just one person survived the explosion: A man thrown in prison overnight for drunkenness due to too much “demon rum.” He was protected  by the walls of his thick stone cell about the size of a small mausoleum.

When rescued from his cell, the prisoner had severe burns over part of his body and needed hospitalization. After recovery, the man (whose named is variously reported as Cylbaris, Syparis and Cyparis) celebrated his fame by traveling the world in the sideshow of Barnum & Bailey Circus. This real-life “survivor” not only became rich from circus life, he did not pass away until the 1950’s.

Today, more than a hundred years later, St. Pierre looks like it still is recovering from a war. Although many structures have been rebuilt, quite a few of the old stone constructions exist in various phases of destruction, resembling the burned out remnants of a bombing raid. And the new town of St. Pierre growing up around the old one seems somehow more tired than the empty stone cubicles sometimes framed by modern buildings.

Our tour bus stops for a 30-minute at the small Volcanological Museum containing relics found in old St. Pierre.  Our guide does not mention—although the sign is in plain view—that the ruin of a great 800-seat theater is only a half-block away.  Perhaps she does this for a good reason. Our group is traveling on two buses, and a fair number of people are not that good at climbing or walking on building foundation stones that are wet due to the drizzle that harasses us everywhere.

Thanks to a previous visit, I know what to look for. It turns out Linda and I are the only ones who visit some of the actual ruins of old St. Pierre, leaving the others to view pictures of the destruction.  First we climb the stairs to the hallways and stage of a once elaborate 800-seat theater. The theater was built in a grand style, constructed as a smaller replica of the theater in Bordeaux, France.  The citizens of Bordeaux, in turn, referred to  St. Pierre’s building “Little Red Riding Hood.”

To me the most striking aspect of what befell St. Pierre is a statue inside the theater that was prominently displayed during my last visit but now shunted to the side so that most visitors overlook it.  Although badly weathered, I find this a haunting statue: It is of a woman who appears to have been instantly calcified during the eruption. Struggling on her hands and knees, her face cries out in agony, symbolizing the pain and loss of everyone that day in St. Pierre.

At the back of the theater, on the left, you look down on more ruins that surround the famed jail cell. It is easily identified by its rounded roof and the fact it is the only unblemished structure amid the rubble. Access to this second site, not well marked, is located on the main road a short distance from the theater.

Today, Mount Pelee is actively monitored by the government so inhabitants of St. Pierre will have good warning if /when the volcano threatens again.  Which it probably will at some point. Brave to rebuild St. Pierre or foolish?

Consider all the people in the States who– with government permission–rebuild year after year in proven flood areas, knowing they will be flooded again; and probably yet again. Seems we should become a smarter species.

Well, let’s not get morbid! Rum was instrumental in single happy ending of St. Pierre. And in my Barbados post tomorrow, expect a rum punch recipe you are guaranteed to like because you get to choose your favorite flavors.  Rum, remember, was invented in Barbados. It’s considered some of the Caribbean’s finest, if not the best.

But it also can rain anywhere, all day

It’s me, Linda, here to tell you about our trip to  Botanical Gardens of Balta on Martinique.

It is a dark and stormy morning as we disembark the Maasdam to find our guides for our first ship-sponsored shore excursion.  I come armed with two umbrellas and a rain jacket to hex away any threat of liquid sunshine.

After standing around waiting for what seemed to be much longer than it is we’re escorted to an awaiting tour bus.  The bus seats are comfortable though they won’t recline and the AC works excellently. Everyone locates a seat and the journey began.  And so did the rain.

Our guide quickly renames the tour to “Don’t Worry, Be Happy,” trying to dissuade any bad attitudes in our group–her “sweeties,” she calls us.  All of us sweeties turn out to be real troopers.

The Balta gardens are located at the edge of the rain forest but it’s not raining when we arrive and make our way down the steep parking lot to the garden entrance. An old Creole stone house serves as an entryway. A comfortable entryway it is, too, with rattan furniture in the sitting area that opens to a veranda and the terraced gardens in the back.

Down the steps we go where a concrete path discretely wound through a tropical canopy of flowering plants and trees.  The foliage is amazing. Elephant ear plants are almost as large as that of a small elephant.  Unfortunately, it starts to rain almost immediately. Tim heads back to the porch, since he only has an umbrella but asks that I stick with the tour.

This happens to be my first day using our new video camera and I am determined to get some good footage even in these conditions.  The term “come hell or high water “ comes to mind but after waiting about 15 minutes for those ahead of me to maneuver their way carefully down the steep, slippery slope,  I change my mind.

The gentleman in front of me turns around and I can tell by the look in his eye he too is planning to escape from our guide, something of a control freak.  I stare at him as water drips off the hood of my rain jacket, the camera bag tightly clutched beneath it.

I announce, “I’m bolting.” He simply nods and follows me back the porch where I locate Tim photographing almost a dozen hummingbirds eating from a feeder at the edge of the verandah, well out of the rain. I am able to get some amazing footage of those beautiful tiny birds.

Suddenly the rain seems like it has been a blessing in disguise.  For as soon as the others began returning, the birds promptly leave. We never would have noticed them or the birdfeeders without the cloudburst.