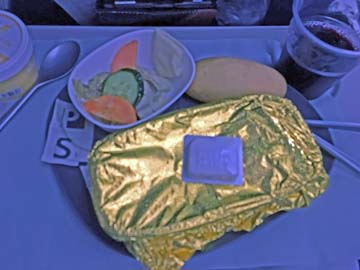 On Delta Airlines flight 128 from Beijing to Seattle this past weekend I was confronted by Delta’s new Main Cabin service now used on long international flights. Everything about it was disappointing, not something I expected from Delta.

Based on my flight, here is what you can expect on Delta Airlines’ so-called “industry leading reinvented international Main Cabin service” to include and what will be missing.

Shortly after takeoff the Main Cabin crew handed out the customary bottle of water and a small hot towel. Normally the next step is for attendants to pick up the used towels.   Then they provide a beverage service where passengers select soda, wine, beer or alcohol to drink before dinner. Neither of those things happened.

Delta Reduces Its Beverage Service
Instead of a beverage trolley, an attendant came down the aisle with a tray of cocktails called a Bellini, a low alcohol concoction made with sparkling wine and peach nectar. Like mimosas, it is typically served at brunches. I don’t like fruity drinks so I declined one as did at least half the passengers around me. Those who did have one had little   to say about it one way or the other.

It turned out the Bellini was the only pre-meal beverage service. No glass of wine or scotch—or anything else—was available before our late afternoon lunch.  Not what you would expect on an 11 hour flight when there is no need to rush. So why eliminate a major beverage service? It has to come down to money. I wondered how much $$ Delta saved by eliminating it?

Delta Dining Turns Troublesome
The next order of business was to rush lunch. A large placemat and a smallish semi-oval plate were provided to us. A small pocket on the left side of the placemat holds the set of new plastic utensils, the best and only service improvement. The placemat was a necessity and not a touch of style. The bottom of my plastic plate was so slick it would slide off the tray without the plasticized placemat to anchor it.

The food trolley, with the beverage trolley following behind, started passing out lunch. We had a choice of appetizers as well as a vegetarian or meat entrée. I chose the hummus appetizer and the chicken dish. French vanilla ice cream in a small cardboard cup was the only dessert. Certainly a strange choice… but also an inexpensive one.

Since appetizers typically are served before the main course, Delta logically would do the same. But no, Delta squeezed the appetizer and main course containers together with a cold bread roll and a pat of butter on my small plate. There was nothing visually appealing about that jumbly hodgepodge.

The crowded plate seemed smaller than the serving trays Delta previously used. With barely room for the roll, the l ice cream cup had to be placed at the edge of the placemat.

My photo to display the plate’s contents is out of focus because I was strapped in too close to the plate.  I had no way to stand higher.

I read later Delta calls this patchwork medley its new “bistro-style” dining experience that it claims was pre-tested on more than 1,200 flights before being debuted in early November.

Does Delta Airlines Truly Listen To Passenger Comments? Assuming passenger feedback was considered during that pre-testing, the food should have been a lot better. What little hummus existed was bland filler. The decent-sized chicken breast was soft and mushy, tasting as if it had been steamed too long. As for the huge refrigerated roll, it should have been heated. They heat rolls on China Eastern, a Delta code share partner. Delta should be able to do it, too.

The French ice cream was made in China. Dairy is not a normal element of the Chinese diet. So it was no surprise the ice cream wasn’t up to par, either. After I’d eaten what I could, I longed for the time-honored salad and cheese and crackers absent from Delta’s “new improved” food service.

We were only 90 minutes into the 11-hour flight when attendants started gathering dishes and placemats. Once everything was collected an attendant announced that KIND Bars and snacks would be available in the back of the plane.  We were welcome to go get them whenever we liked; fair warning that none would be passed out.

After lunch the attendants seemed to disappear until our pre-landing snack. During the night, no attendant visited the Main Cabin to pass out a second bottle of water, once customary on long international flights. I’ve never seen a Delta flight so bereft of attendants.

Change for Change’s Sake Rarely Works
Delta obviously has gone to a lot of trouble to redesign its Main Cabin dining service.   However, offering fewer drinks, fewer food items on a smaller tray and less cabin service felt like a major cost-cutting effort. The company as much as admitted they were reducing food quality when it characterized this new experience as “bistro-style” dining. Bistros typically are small, inexpensive places with fewer options than a restaurant. Just as I encountered in Delta ’s Main Cabin experience. What a disappointment.

Writing this post took longer than eating that lunch so why waste time doing this? I’m hoping Delta will realize this new dining experience is as poor an idea as its plan several years ago to force flight attendants to wear brightly colored glossy uniforms. That embarrassment did not last long.

With enough feedback I’m hopeful that Delta Airlines Main Cabin service will return to the way it was. There was never anything wrong with it and a lot about it that was right. There is  little to like about Delta’s self-proclaimed “industry leading reinvented international Main Cabin service.”

Once you’ve experienced it, if you don’t like (or even if you do), send them some feedback.  I intended to provide a contact but Delta guards its email addresses very carefully. I gave up after 15 minutes of searching. Maybe Delta Airlines doesn’t want feedback after all.